STOP THE BLEED℠ is an international training program to educate the public on what to do if they are faced with a life threatening situation of severe bleeding. Following mass shooting and other acts of mass violence, the American College of Surgeons formed a group of experts from emergency medical care, government and law enforcement to discuss the issue. This group became known as the Hartford Consensus. From this group, came the life saving intervention training for the general public known as STOP THE BLEED℠. Since then, over 1 million people worldwide have been trained!

Dr Habeeba Park and Dr. Elliott Haut get FOX45 on the STOP THE BLEED campaign

To find area classes and more about STOP THE BLEED℠ history, goals, story or to become an instructor visit stopthebleed.org or click on STOP THE BLEED 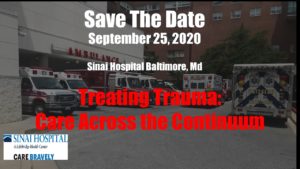 IN THE MARYLAND TRAUMA NETWORK: